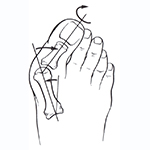 The hip valgo is surely the most common pathology of the forefoot and its emergence gives rise to numerous problems of walking and posture. WHAT IS ALLOWED VALGO? Lute valgo is a deformity of the first finger of the foot, characterized by the deviation within the first metatarsal bone and the outside of the first finger, which creates a pathological angulation of the allure with redness and inflammation at the head level of 1 th metatarsal. In a rather colorful way patients point to this foot pathology with the term nocetta, potato, onion, since the premature head of the first metatarsus is the most significant visual expression of this pathology. In the presence of an alluvium valgus, the first metatarsus and the alluvium are no longer aligned but form the so-called valdemo angle, which is called deformity.